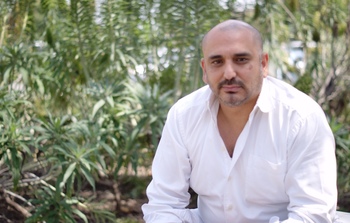 Isaac Sandoval is a bilingual English/Spanish Los Angeles native who served 5 years in the US Marine Corps stationed at Cherry Point NC and aboard the USS Battaan. Being stationed in the east coast has allowed for a natural, neutral accent to take shape as well as picking up distinct dialects from fellow servicemen from Puerto Rico and other Latin American places. It also served to gain a professional neutral English accent as well as being exposed to a fruitful array of accents from fellow servicemen stemming from every corner of the United States. For almost 2 decades, he has voiced commercials, promos, trailers, video games, cartoons, ADR, as well as medical narration and political campaigns.

Coming from a radio background, voice over work was always a dream. Voicing an innumerable amount of commercials helped mold a Spanish diction that is on par with natives of Latin American.

With roles ranging from a boisterous personality in the highly anticipated animated series, Victor and Valentino on Cartoon Network, to voice matching for Gabriel Iglesias in the movie Show Dogs, Isaac has been a voice that has enriched projects in English as well as Spanish. His voice can also be heard daily as one of the voices dressing radio station KBUE 105.5 in Los Angeles as well as the voice of El Mameluco, a live nationally syndicated entertainment news show on LBI Media Inc. He was also recently awarded with the prestigious Radio Mercury Award for “Soccer for Covered California”.

Never one to turn down a challenge, Isaac has lent his voice to the popular video game franchise Call of Duty, the Spanish trailer for The Single Moms club, as well as a plethora of nationally syndicated commercials.