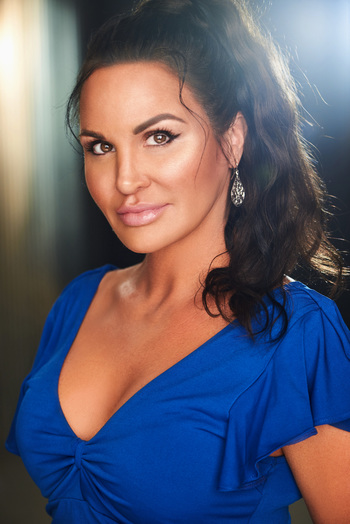 Recent credits include the lead promo voice campaign for Batwoman and In the Dark for the CW. The voice of Super Bowl 50 and 53 for CBS.Most known for her role as Cruz on NBC's critically acclaimed series Third Watch, and her recurring role as an undercover agent Ribera on The Unit for CBS.

Other roles include, In Plain Sight, Saving Grace, Chuck for NBC, HBO's Mind of the Married Man, Everybody Hates Chris.Animation credits include Turbo Fast for Netflix, Static Shock, Firebreather and and Ben 10 for Cartoon Network.

She helped make the phrase "Maybe She's Born With it..Maybe It's Maybelline "....the most recognized tag line in advertising and was part of Maybelline New York becoming brand of the year and have advertising's launch of the year.

She was the first female live announcer for the Espy Awards and other live announce credits include The Heisman Awards, Pegasus World Cup, the Nascar Sprint Cup Series Awards, and the Sports Humanitarian Awards, the MTV Movie and TV Awards.

She was the voice of the winning Golden Trailer award for the RoboCop feature film-other trailers include FutureWorld, Hunter Killer, The Anomaly,Black Swan,and 50 Shades of Grey.

You heard her narrations on US Women's Soccer, The Breeders Cup, The Indy 500 for ABC, World Series of Poker Lady Luck, US Open and Wimbledon,and NHL's Voice of the Future All Star.

She was a part of the narration launches for R.Kelly Impact Documentary ,Alita Battle Angel for James Cameron, Altered Carbon for Netflix and Mindhunter for Netflix and David Fincher.