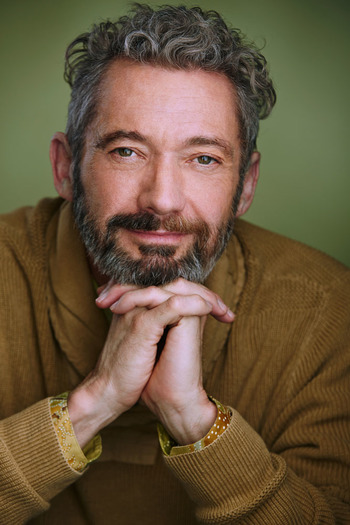 Cam Clarke began his career at the age of six performing with his family on ABC’s much loved musical variety show “The King Family Show”.

He is best known as the original voice of Leonardo on “Teenage Mutant Ninja Turtles”, and Liquid Snake in “Metal Gear Solid”. Other popular roles include Kratos in “Tales Of Symphonia”, Die Fledermaus in “The Tick” and as He-Man in the reboot of “He-Man Masters Of The Universe”. Anime fans will know him best as Max Sterling of “Robotech” fame and Kaneda in the cult hit “Akira”.

Cam’s favorite roles are Freddy The Ferret in the Emmy Award – winning series “Back At The Barnyard” and Snoopy in the animated version of the Broadway musical “Snoopy The Musical”. He is very proud to be the official voice of Simba from “The Lion King” in all the Disney theme parks as well as the singing voice of Simba in “The Lion King; Simba’s Pride”.

But one of the things he is most proud of is the opportunity afforded him through the success of these many characters to speak to troubled gay teens struggling with coming out.

“It is very humbling”, says Cam, “to receive mail from kids who are afraid to come out to their families but feel safe reaching out to the gay guy who plays such iconic heroes as Leonardo or Simba.”