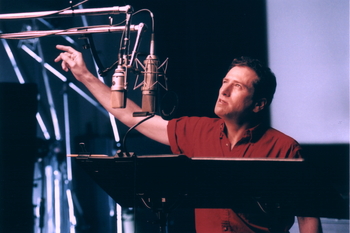 Corey Burton is a Multi-Voiced Professional Character Voice Actor/Announcer for over 30 years, since age 17. He is schooled in classic traditions of Radio Theatre, becoming the last fully qualified character & lead actor "Voice Man" accepted into Hollywood's original Radio Acting Community, during a ten-year resurgence in the 1970s.

Corey had a seven year stint as a NBC Peacock Logo signature voice(s), with promo announcing on every major American TV network for more than 2 decades and documentary narration on many educational networks. He is one of the most popular "utility" announcer/character voice actors for both Disney and Universal Theme Parks, world-wide.

His voice characterizations are featured in Video Game blockbusters like "Final Fantasy" and "Kingdom Hearts". He is known for distinctive old-fashioned logo voices for Old Navy, and Real California Cheese radio spots, and is also a former radio/TV/industrial sound production engineer (known as an expert on classic/esoteric microphones and audio gear and occasional dialect consultant).