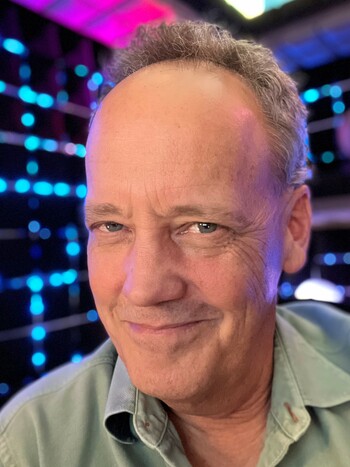 Dee Bradley Baker is one of the entertainment industry’s most versatile and sought after A-list voice actors. His resume lists hundreds of roles in television shows, movies and top video games, spanning the past three decades.

Since he started bringing distinct life to an army of soldiers in Lucas Animation’s “Star Wars: The Clone Wars” in 2008, Dee has been voicing a steadily growing number of characters in "Star Wars" television series, movies and games.

A stand out example of Dee’s talents can be found on Disney Plus/ Lucas Animation’s hit series, “Star Wars: The Bad Batch,” where Dee voices all five members of the elite team of soldiers.

Dee is featured in many top video games including the "Destiny" series (Variks), "Overwatch" (Hammond the hamster) and many characters and creatures inhabiting Blizzard Entertainment's “World of Warcraft,” “Diablo,” and "Starcraft" games.

Notable past roles include Perry the Platypus for Disney’s “Phineas and Ferb,” and Momo and Appa in Nickelodeon’s “Avatar: The Last Airbender” series. Dee was also Daffy Duck and Taz in Ivan Reitman’s “Space Jam” movie.

Fans of the Walt Disney theme parks may be surprised to learn that Dee voices the parrot on the "Pirates of the Caribbean" ride and Boba Fett for the "Star Tours 3D" attraction.

Dee's enjoys adding to his website iwanttobeavoiceactor.com, the web’s top resource for free insight into the art and craft of voice acting.