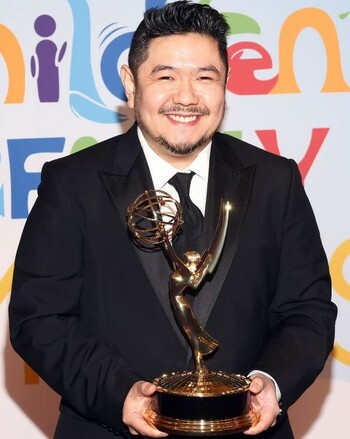 Eric Bauza started his career in animation as a character designer working with a few production studios in Hollywood. It was this introduction to the animation world that led him to a successful career as one of the most in demand voiceover artists in town.

He received Emmy and Annie Award nominations for his work as the title character in “The Adventures of Puss in Boots” and “Muppet Babies” as well as for Bugs Bunny and Daffy Duck in “Looney Tunes Cartoons.” His other television credits include “Looney Tunes Cartoons”, “Unikitty”, “Archibald’s Next Big Thing”, “The Rocketeer”. “Ballmastrz: 9009,” “Rise of the Teenage Mutant Turtles,” Disney’s “Star vs. The Forces of Evil,” “Breadwinners,” “Uncle Grandpa,” “Atomic Puppet,” “The Powerpuff Girls,” “The Fairly OddParents,” “Wabbit: A Looney Tunes Production,” “Ultimate Spider-Man,” “Teenage Mutant Ninja Turtles,” “Guardians of the Galaxy,” “Transformers: Robots in Disguise,” “Sanjay and Craig” “Mighty Magiswords” and the voice of Fozzie Bear, the big-hearted comedian, in Disney Junior’s reimagined “Muppet Babies” television series.

On the big screen, Bauza is known for voicing Daffy Duck, Porky Pig, Foghorn Leghorn, Elmer Fudd, and Marvin the Martian in “Space Jam: A New Legacy”. He has voiced characters in “The Book of Life,” and “The SpongeBob Movie: Sponge out of Water”, as well as Woody Woodpecker in the “Woody Woodpecker” feature film for Universal Studios. He has also voiced characters in commercials such as Lucky the Leprechaun for Lucky Charms cereal, Trix Rabbit for Trix cereal and Marvin the Martian for Nike. Most recently, he voiced Marvin the Martian for Walmart commercial, “Famous Visitors”. Originally from Toronto, Ontario Canada, Bauza currently resides in Los Angeles. In his spare time he enjoys spending time with his family and friends.