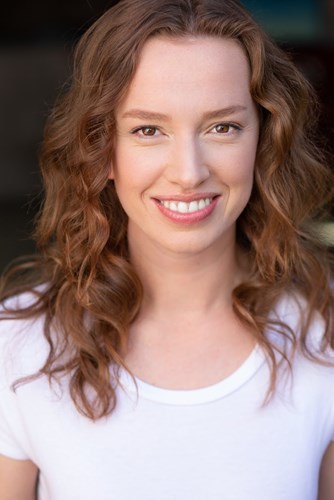 Ferelith Young is a gangly, gravelly-voiced redhead hailing from The Great White North. And, since you’re wondering, that’s a Scottish Viking name and  means little princess and iron maiden. So, working with a lot here. Little F was studious in the class and competitive on the rink, essential training for an artist. She has an Honors degree in International Development Studies from McGill  University and, after a brief stint in Paris, made a quick 180 into acting. She  moved to New York City and trained at The Neighborhood Playhouse before  founding her own theatre company so she could produce as well as perform -  iron maiden right?

Ferelith has appeared in theatres across North America, notably in New York at La MaMa ETC, Theatre Row, The Living Theatre, and The Morgenthau and, in  Toronto, with Theatre Machine, Tarragon and Theatre Passe Muraille.

Currently you can catch Ferelith as Sharon on DC Universe’s new show Titans, as Sam Maclean on CBC’s new hour long drama Diggstown and as Tawny Hutt on Cardinal.