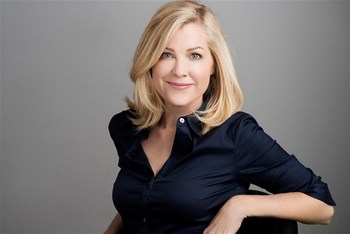 Jennifer Aspen will be seen in the highly anticipated Darren Star dramedy “GCB” (Good Christian Belles), premiering Sunday March 4th, at 10pm on ABC. The show follows a divorced mother of two who returns to an affluent neighborhood in Dallas but finds the idyllic Texas family life is just a façade for gossip and fraud. Aspen stars as Sharon Peacham, a former beauty queen who was the envy of all the guys and girls in high school. However, after being sabotaged cost her the Miss Teen Dallas crown, things have never really been the same and are only exacerbated by her inclination for a little bit of stress-eating. Kristen Chenoweth, Leslie Bibb and Annie Potts are among the ensemble cast.

Jennifer Aspen first came to public attention starring as ‘Daphne’ on FOX’s popular drama “Party of Five.” Most recently, she was featured in a recurring role on FOX’s Emmy winning hit “Glee” and won a SAG honor for her work on the show.

She was a series regular on four other shows: ABC’s “Bob Patterson,” USA’s “Claude’s Crib,” NBC’s “Come to Papa,” and opposite Rodney Carrington on ABC’s comedy “Rodney”. She has also guest-starred on several shows including “Friends,” “”The Closer,” “CSI,” “Private Practice” and more.

Jennifer has a BA from UCLA’s School of Theatre, Film and Television. She lives in Los Angeles with her husband, 3 cats, and 2 dogs.