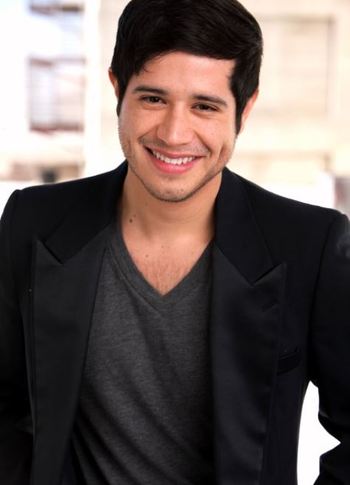 A first generation Mexican-American raised in the heart of Los Angeles, Jorge Diaz was bit by the acting bug at an early age. Stealing scenes by 15, Diaz’s love for acting and his passion for the arts have led him to projects that trail blaze new stories and images for Latinos in the entertainment industry.

While Diaz has a true love and passion for all areas of the entertainment business, his childhood dream of becoming a voice over artist came true when he booked the lead role of Noah in the Emmy-nominated PBS animated series "Oh Noah!” This interactive series, designed to teach Spanish to children through animated videos and games, allowed Diaz to work in his favorite genre. As Julio, Diaz joined the canine cast in Netflix’s 2018 musical “Puppy Star Christmas. Diaz is honored to voice Gabe in Disney’s 2017 Emmy nominated animated series, "Elena of Avalor," featuring Disney's first Latina Princess. Diaz’s Gabe is Elena's friend and rising star of the Royal Guard. Diaz is also thrilled to voice Ojo, the blue haired giant munchkin, in the Amazon Studios Emmy winning series "Lost in Oz." As Dorothy’s friend, Ojo helps Dorothy navigate the mysteries of Oz.

Equally skilled in comedy (alum of UCB Improv School) and drama, Diaz's versatility as an actor is evidenced by the varied films and roles he chooses. Most recently Diaz starred as SPC Israel Garza in Nat Geo’s Iraq war drama “The Long Road Home,” based on the novel by Martha Raddatz. Prior to “The Long Road home,” Diaz earned his first nomination for Best Supporting actor at the 29th Annual Imagen Foundation Awards for his performance as Hector Estrella in “Paranormal Activity: The Marked Ones.” The film became the first studio film ever to be released worldwide with an all-Latino lead cast. Alfonso Duralde of The Wrap stated that "Diaz all but walks away with the movie." In 2013, Diaz starred as the lovable goofball Paulie in the groundbreaking half hour drama “East Los High.” The exclusive HULU series became an instant hit winning several awards along with being nominated for 5 Daytime Emmys. The innovative teen drama made history and headlines as the first English-Language show with an all Latino cast.

When Diaz isn't working on a project, he spends much of his time with his diverse group of friends sharing ideas, creating art and supporting each other's passions. Diaz currently resides in Los Angeles with his dog, Trusty Boots.