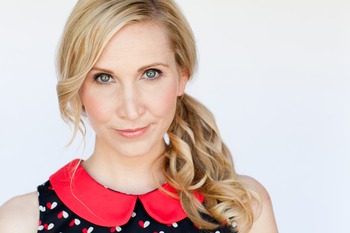 Katie is thrilled to be the official voice of Disney's Snow White, the 4th since the inception of the character in 1937. Katie is a natural mimic and has voice-matched many celebrities including: Kristen Wiig, Kaley Cuoco, Amy Poehler and America Ferrara. KVT is among an elite group of women to have been the voice of a TV network having been the promo voice for The Style Network for Comcast NBCUniversal.

The LA Times proclaimed that Katie has "electrifying vocals that incinerate the house." She has sung with the likes of Dick Van Dyke, Kristin Bell, Zachary Levi, Vanessa Williams, Katey Sagal, Sean Hayes, Lea Thompson, Steven Weber and Vicki Lewis. No stranger to on-camera work, Katie shot episodes of The Middle, How I Met Your Mother, Anger Management (recurring), Community (recurring), The Tonight Show (recurring sketch player), and The Unit among others. She was seen in film festival darlings Zombie Prom and TiMER and worked with director Jon M. Chu (G.I. Joe: Retaliation) in When the Kids Are Away. You likely saw her series of Dannon Oikos Greek Yogurt commercials with the ever-handsome John Stamos! Katie got her start in musical theatre and toured the US in the Broadway First National Tour of Little Shop of Horrors (Jerry Zaks, dir.). She is a proud graduate of Michigan State University. Go Green!