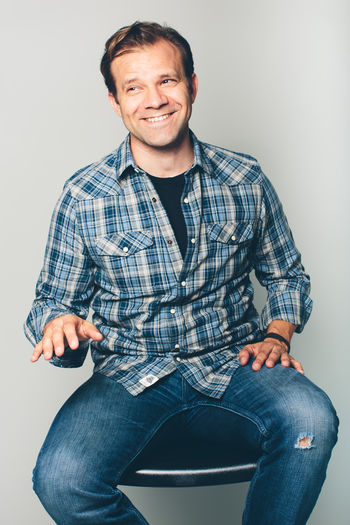 Liam O’Brien has built a solid reputation as a reliable go-to guy in the world of games and animation.

As an actor, he has worked on well over 400 video game and animation projects. Some of the more well known animated series he has lent his voice to include TRANSFORMERS, AVENGERS ASSEMBLE, WOLVERINE AND THE XMEN, PLANET HULK, PHINEAS & FERB, SOFIA THE FIRST, GI JOE, HULK AND THE AGENTS OF SMASH, and NARUTO.

On the video game end, popular titles include WORLD OF WARCRAFT, THE LAST OF US, SHADOW OF MORDOR, ELDER SCROLLS, FINAL FANTASY XIII, ASURA’S WRATH, DARKSIDERS, STARCRAFT, CALL OF DUTY, and RESIDENT EVIL.

In addition to his long list of acting roles, Liam has also spent an ample amount of time outside the booth, both as voice director and writer. THE LAST OF US, RESIDENT EVIL, and a slew of LEGO games are just a few of the many projects he is proud to have contributed to.

On top of all that, Liam is part of the cast of hit D&D show, Critical Role, which is watched and loved by folks from all over the world.