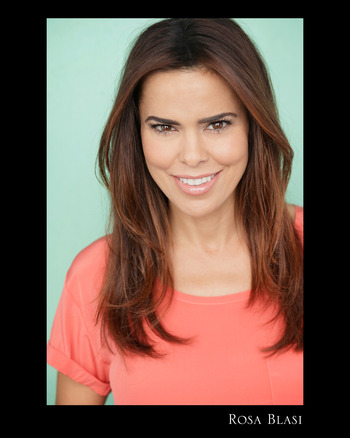 A stage veteran since the age of 8, Rosa performed in over 40 Chicago theatre productions from Annie to The Vagina Monologues. A former Miss Chicago and alumni of the Second City Conservatory, Rosa moved to L.A. to pursue her entertainment career and has been featured on more than 250 episodes of television! Rosa has guest starred and recurred on episodes of General Hospital, Married With Children, Fraiser, Becker, Drew Carey, 90210, Melrose Place, CSI Miami, American Dad!, Mr. Sunshine, and Hot in Cleveland. Film audiences know Rosa for her role as Maria in the Sony blockbuster horror film The Grudge.

Most television audiences remember Rosa as “Dr. Lu Delgado” from the 6 years she spent starring on the Lifetime medical drama, Strong Medicine. She followed that series with 3 seasons on the ABC Family hit show Make It Or Break It, and is currently filming her 3rd season of the popular Nickelodeon sitcom The Thundermans. Rosa has performed stand-up in Los Angeles (Laugh Factory, Comedy Store, L.A. Improv), and wrote her comedic memoir in 2011 published by Harper Collins Jock Itch: Misadventures of a Retired Jersey Chaser. The book details the hilarious and shockingly honest cautionary tale of her former professional athlete “addicition”, and what “not to do in your 20’s". Jock Itch is currently being optioned by Asylum Entertainment.